Interesting transfer news are out claiming that Arsenal are linked with Wolfsburg midfielder Luiz Gustavo. 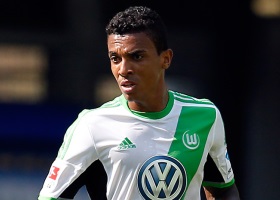 Kicker reported that the Brazilian international midfielder has a buyout clause in his Wolfsburg contract that would allow him to leave for a ‘big’ club after the tournament.

Wolfsburg sporting director Klaus Allofs refused to reveal any details of the clause, but said: “Even at VfL [Wolfsburg] nobody is unsellable.

“For me it is important that we show [players] that we are willing to negotiate if an offer is made that is reasonable in a sporting sense and also makes good business sense for VfL.”

Barcelona are thought to be readying a bid but Arsenal could also rekindle their interest as they look for another defensive minded midfielder.

Man Utd To Do Battle With Arsenal For Marco Reus