Reports have emerged claiming that Arsenal and Chelsea are being offered Atletico Madrid striker Luciano Vietto. 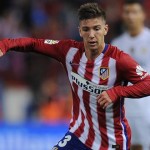 Don Balon reported that the young Argentine is being made available ahead of the January market after failing to impress since his summer arrival from Villarreal.

Vietto and Atletico coach Diego Simeone have discussed his situation and agreed the best option is for him to move on.

Four clubs are already being sounded out by intermediaries: Arsenal, Chelsea, Inter Milan and PSG.

At Chelsea, it’s suggested manager Jose Mourinho is a big fan of Vietto and could sell Loic Remy and replace him with the Argie.