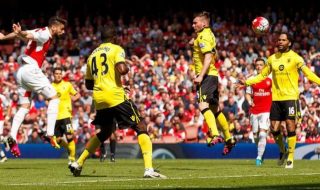 Arsenal finished second in the Premier League for the first time since 2005 as they beat relegated Aston Villa thanks to an Olivier Giroud hat-trick.

Giroud headed Arsenal ahead early on but the hosts played nervously until he struck again, sweeping home from six yards after good work by Mesut Ozil.

The Frenchman was then put through by Hector Bellerin for his third.

“It’s happened again,” sang Gunners fans at the end as they celebrated finishing above Spurs for the 21st consecutive season.