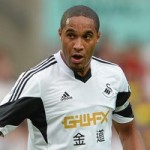 Reports are out claiming that Arsenal have a deal for Swansea City defender Ashley Williams.

The Mirror revealed that there is a deal in place for Swansea and Wales centre-back Williams.

It just needs manager Arsene Wenger’s say-so to get it over the line.

The 28 year old joined Swansea in 2007 and has gone on to make a total of 233 appearance scoring 11 goals along the way.