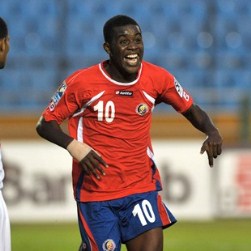 It has been confirmed that Arsenal have signed Deportivo Saprissa youngster Joel Campbell.

The 19 year old striker started all three of Costa Rica’s group games at the Copa America and also represented the country at the Gold Cup earlier in the summer.

Arsenal scout Richard Law is believed to have worked in conjunction with agent Joaquim Batica to ensure that the Gunners will sign the player who scored in Costa Rica’s victory over Bolivia in Argentina.

Deportivo president Juan Carlos Rojas has revealed to ADN Radio that Campbell will be joining the Premier League team for a fee of $1.5 million (£930,000).

He said that the transfer would be “very beneficial for him (Campbell) and for the country”.

Although Campbell has not played in 75 per cent of his country’s recent matches due to his young age, Arsenal could apply for a work permit on the basis that he is a special talent.

Alternatively Campbell could follow a route travelled by Carlos Vela and Pedro Botelho and spend a spell away from the club on loan before he acquires the necessary documentation to play in the Premier League.

The striker will represent Costa Rica in the World Under-20 Championship in Colombia later in July.

Charlie Adam Ready To Fight For His Place At Liverpool