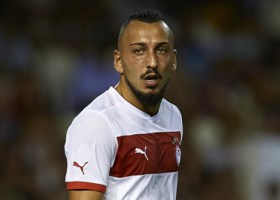 The 25 year old Greece international is a top target for Liverpool ahead of the January market.

Wenger admitted he has been keeping tabs on the form of Mitroglou after previously coming up against him in the Champions League.

“At Arsenal we know him well because we have played against Olympiakos in the Champions League,” Wenger told Eurosport.

“He has both physical presence and the ability to finish in the box.”