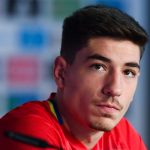 Bellerin has been linked with a return to Barcelona, but Sport says Gunners chief Richard Law has just met with his agents to discuss a new deal.

Arsenal boss Arsene Wenger has acted quickly after learning of serious interest from Barca and PSG.

Bellerin’s current deal runs to 2019, but Wenger will hand him an improved agreement and also an extension.

Its suggested terms could be struck before the end of the Euros.