It has been revealed that Arsenal fans heckled players at Stoke-on-Trent station after defeat at Stoke City on Saturday. 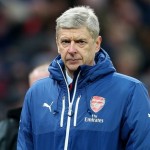 The Daily Mail reports the fans, upset after seeing their side concede three times during a woeful first half, positioned themselves on the platform as the players were boarding the train back to London.

When Wenger appeared, they began to boo, with one shouting “get out of my club” and another adding “F*** off”.

Saturday’s 3-2 defeat at Stoke sees Arsenal, who have qualified for the Champions League in each of their last 17 seasons under Wenger, sitting in sixth place, three points off the top four after 15 games.