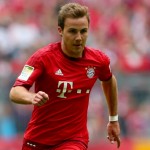 Reports are out claiming that Arsenal have joined the battle for unwanted Bayern Munich midfielder Mario Gotze.

Suddeutsche Zeitung says Arsenal are weighing up a bid to rival Liverpool for the signature of Gotze.

Arsene Wenger is pondering a move for the World Cup winner who has been heavily linked with a switch to Anfield.

Gotze starred under Reds boss Jurgen Klopp at Borussia Dortmund and is rumoured to be top of his former manager’s wishlist.

His contract with Bayern Munich is up next season and the Bavarians will be reluctant to let him leave for free in a year’s time.