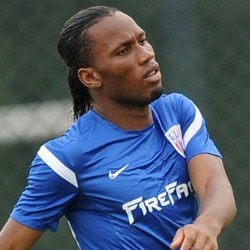 Sensational news are out claiming that Arsenal are lining up a bid to bring Chelsea legend Didier Drogba back to London.

The Sun revealed that the Gunners want to prise the Ivory Coast international away from Shanghai Shenhua.

It is said that the Premier League giants are desperate to find a proven scorer to replace Robin van Persie.

And they have made enquiries with the Chinese club to see if there is a way of bringing the striker, 34, back to London.

The Gunners are aware of internal upheaval at Shanghai where Drogba and ex-Chelsea team-mate Nicolas Anelka have been caught up in a boardroom power struggle.

Real Madrid manager Jose Mourinho, who took the hitman to Stamford Bridge in 2004, also kept an eye on the Ivorian during the summer transfer window.