It has been revealed that Arsenal boss Arsene Wenger is being linked with a move for Manchester City winger Jesus Navas. 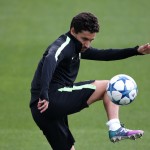 The Frenchman has been criticised over the workload he’s handed Alexis Sanchez and is now shopping around Europe for cover for the Chilean.

TMW reported that Spain international Navas is on Wenger’s shortlist, who at 30 years of age could become available for an affordable fee in January.

The midfielder has enjoyed an impressive campaign at City, where manager Manuel Pellegrini would be reluctant to lose him midseason.

Wenger recognises he needs to buy quality over the winter market to revive their title challenge and he has Navas under consideration.