It has been revealed that Chelsea are yet to make a bid for Anderlecht striker Aleksandar Mitrovic. 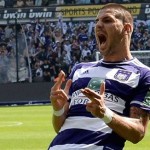 Blues boss Jose Mourinho and football chief Michael Emenalo are both big fans of the Serb and have discussed moving for him as a replacement for Loic Remy.

Mitrovic has also been linked with Arsenal, Liverpool, Newcastle United and is in talks with Benfica.

But the interest has turned his head.

One of Mitrovic’s closest advisers is Mateja Kezman, the former Chelsea striker.