Reports are out claiming that Wilfried Bony is ready to sign a new deal with Swansea City. 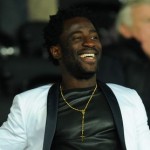 The Daily Star reported that the Ivory Coast striker has been linked with moves to Arsenal, Liverpool and Tottenham following a stunning debut season but he is set to extend his deal with Garry Monk’s side until 2018.

“Negotiations are going very well. Hopefully things will be done this week,” he said.

“I have a great relationship with my team-mates, the staff and fans. It is a fantastic club and I am I am happy to be here.

“I am focused on Swansea and a one-year extension would be perfect for me.”

It is believed his new deal does not include the £20m release clause present in his current contract.