Reports are out claiming that Arsenal midfielder Santi Cazorla is full of praise for teammate Jack Wilshere. 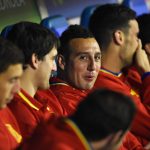 Wilshere missed the majority of the last campaign due to injury, but has since returned to make Roy Hodgson’s squad for Euro 2016.

Cazorla told Arsenal Player: “Arsenal itself has a lot of young talent, such as Jack Wilshere. He is a spectacular player and I just hope he recovers from his injuries because I think he can be a really important player for both Arsenal and the English national team.

“Jack mixes English and Spanish skills. He has a powerful acceleration, a low centre of gravity and he is left footed, which makes him a joy to watch.

“In Premier League football, counter attacks are a very common thing no matter the game’s result, while in La Liga the team who is up in the scoreline controls the game a lot more. But even English football philosophy is changing little by little.”