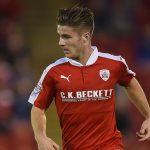 Reports are out claiming that Arsenal midfielder Dan Crowley admits he faces another season away on-loan next term.

Crowley, 18, helped Barnsley seal promotion back to the Championship this year but Gunners boss Arsene Wenger believes he is not yet ready to play Premier League football.

It means another loan spell is on the cards for a player who has been linked with Coventry City.

He told the Coventry Telegraph: “‘I have spoken to the boss (Wenger) and he says I’m not physically ready for the Premier League just yet.

“That’s fair enough and I completely agree because it’s a tough league on your body and there’s so much running that people don’t realise.

“So I will work on that and hopefully be ready when my time comes. I don’t want to be pushed in and not be ready. When I get my chance I want to make sure I’m ready and take it.”