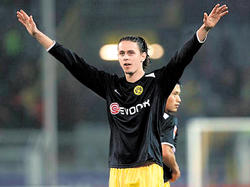 Local British newspapers have reported that Arsene Wenger and the Gunners are back on the hunt of Borussia Dortmund defender Subotic.

It is also reported that Arsenal chief executive Ivan Gazidis was in Germany on Monday ready to make a £12m offer for the 20-year-old Serb.

However Arsenal will be caught in a battle to sign the youngster as Everton have also shown interest in the 6ft 4in centre back.