Reports have emerged claiming that Arsenal expect to announce the signing of Chelsea goalkeeper Petr Cech next week. 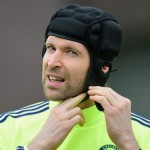 The Daily Star revealed that Cech, 33, will undergo more medical tests today after weeks of talks.

Paris St-Germain were interested in snapping the keeper up, a move Mourinho was far more keen to push through.

But Cech didn’t want to uproot his family and always preferred a move to Arsenal.

He will sign a £100,000-a-week contract at the Emirates – the highest the club have ever handed out to a goalkeeper.