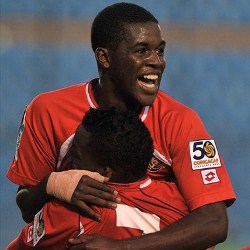 Deportivo Saprissa wonder kid Joel Campbell has confirmed that he is once again in talks with Arsenal.

Campbell, who has been playing for his country in the Under 20 World Cup in Colombia, saw a move to the Emirates fall through last month after Man United showed a late interest.

However Arsenal’s £1 million move for the Deportivo Saprissa striker now appears to be back on track after the player told crunchsports.com: “We are talking to Arsenal again.

“I have not signed yet, but I’m waiting to hear from my agents.”

Arsenal would have to send the player out on loan until he could obtain a work permit but boss Arsene Wenger is keen to tie up the deal to ward off interest from United and Real Madrid.