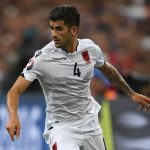 Reports have emerged claiming that the agent of Napoli fullback Elseid Hysaj insists he’s happy where he is.

The Albanian international has been linked with Arsenal.

“Elseid is feeling great, he’s proving to be a player of great quality on the international stage,” Mario Giuffredi told Radio Crc.

“The fact that Napoli are looking at defenders like Fabinho doesn’t bother me, but I think in the end Gino Peruzzi [of Boca Juniors] will come.

“Hysaj is still calm, because I think he’s unmovable from the right flank. I want to point out that Hysaj is not for sale, he’s shown a lot at Napoli and he’s happy in the city.

“The club wants to revise his contract, so there’s no reason to leave.”