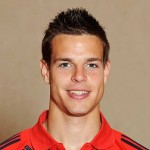 Interesting news are out and it has been reported that English Premier League club Arsenal are preparing a £2million bid for Osasuna full-back Cesar Azpilicueta.

The Spain Under-21 star, who can also play as a defensive midfielder, is left-footed but has mostly played on the right.

The player said that he is aware of rumours linking him with Arsenal but said that he have yet to speak with anybody from the club.

Azpilicueta added that at the moment, he can only concentrate on working with Osasuna and progressing his football.

Bellamy No Longer Under Police Investigation


Arshavin Set For Action Against Fulham On Saturday