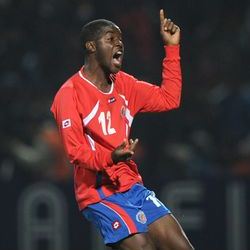 Arsenal are convinced they have a deal for Costa Rica sensation Joel Campbell.

The Sun has reported that the Gunners have won the race to sign Costa Rican wonderkid Campbell.

It is said that the Gunners’ £900,000 bid for the striker, 19, was accepted by Deportivo Saprissa last month.

But the move broke down when he refused to make a decision until after the Under-20 World Cup in Colombia.

The starlet reopened talks with Arsenal last week, though, and a source close to him claims a deal has been done.