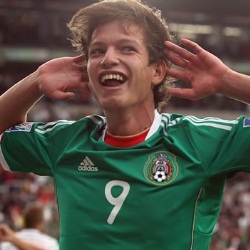 Reports are out claiming that Arsenal are chasing Mexico U17 World Cup champion Carlos Fierro – and hope to land him for £2 million.

The striker scored four goals and claimed five assists to help his nation to glory at the Under-17s World Cup.

Fierro, now age 26, plays for Chivas Guadalajara and was voted the third best player at the tournament. The youndster has also been compared to Manchester United ace Javier Hernandez.

The Gunners would be prepared to loan Fierro back to Chivas and play the Mexicans in a friendly.

Tottenham and German side Hoffenheim are also watching him.