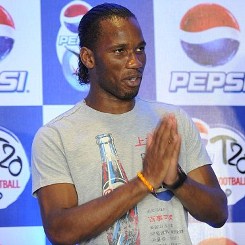 Wenger says he’d move for the Shanghai Shenhua striker if he was available on a free.

Wright told the Absolute Radio: “I’d love to see Didier Drogba at Arsenal. I’d like to see him come back to England [laughter] and not play against Arsenal because he’s always demolishing them, the back four. But yeah, of course you’ve got to play that kind of thing down. I think if Drogba’s coming back to the premiership I’m sure there’ll be a queue and I think if Arsenal are in and around it, I don’t think that’s a bad thing. That’s not a bad signing.

“Hopefully Arsene can make that happen, if it can happen, because I think he will be a definite positive move in respect of Arsenal and I think he’s still got something to offer in the premiership. So fingers crossed that something can come of that.”