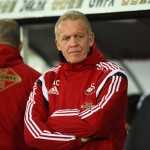 Reports are out claiming that Swansea City coach Alan Curtis is aware that Arsenal will be looking to respond strongly in this week’s clash between the two clubs.

The Gunners came under severe criticism following the 3-2 defeat at Manchester United on Sunday and will be looking forward to bouncing back in style when Swansea travels to the Emirates Stadium on Wednesday night – a situation which Curtis is wary of.

Curtis said: “They will want to bounce back quickly (Arsenal lost 3- 2 to Manchester United on Sunday).

“Petr Cech has said they need to win the next two games but it is up to us to get a similar performance as it was against Tottenham but with a little bit more attack going forward.

“It will be interesting, we have a good record at the Emirates – a couple of victories and a draw – but we will be the underdogs.”