It has been reported that Arsenal winger Ryo Miyaichi is currently playing for FC Twente reserves. 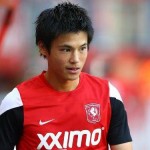 The Japanese international has struggled for form since his arrival in August, though he impressed coaching staff on the weekend with a wonder goal against PSV B .

The midfielder’s loan runs to the end of the season and he is expected to be released by the Gunners in June.