Reports are out claiming that Arsenal midfielder Jack Wilshere is adamant he’s fit for the Euros. 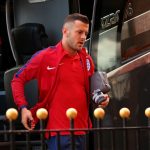 Wilshere managed to appear in just three matches for his club side last season after a broken fibula suffered just days before the Community Shield.

Roy Hodgson has still backed the injury-plagued Wilshere to play a key role in England’s squad at the Championships in France, starting him in two of the three warm-up matches over the past month.

“If I wasn’t fit enough I wouldn’t be here because I would have told them I’m not ready,” he said.

“Before my injury I was playing some of my best football and that gives me confidence now.

“I am the type of player who likes to play forwards and that can make the difference from midfield.”