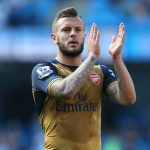 Reports are out claiming that Arsenal midfielder Jack Wilshere insists he’ll be in top shape for the Euros.

Wilshere is expected to be named in Roy Hodgson’s England squad on Monday despite missing almost all of the season with a fractured leg.

But he played 66 minutes in Sunday’s 2-2 draw at Manchester City and is set to start against Aston Villa this weekend.

England play friendlies against Turkey, Australia and Portugal before kicking off their Euro campaign against Russia on June 11.

Wilshere said: “I have been in contact with the coaching staff at England and they know I have been fit for six or seven week’s training now.

“Roy has asked me how my injury is and how I feel. He hasn’t really given too much away so we’ll see on Monday. Fingers crossed.”