Reports are out claiming that Arsenal boss Arsene Wenger confesses they were never a title chance last season. 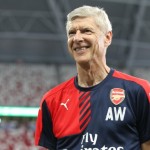 Wenger concedes losing his stars has hit their ambitions over the years.

“When you lose your best players it is impossible,” he said, with the likes of Samir Nasri, Robin van Persie and Cesc Fabregas in mind. Before that, Patrick Vieira, Ashley Cole and Thierry Henry.

“You see opponents strengthen when they are already stronger than you.

“You just get into the top four and see others still strengthening. On top of that you’re losing your best players, so it is difficult to be convinced you can still win the league.

“Last year, no, because after six games we were 11 points behind Chelsea and to catch 11 points back was nearly impossible.”

The Fuzzy Arsenal Players (Cesc Fabregas as a Bunny)