Reports are out claiming that Arsene Wenger has urged Arsenal to make the most of the Champions League opportunity ahead of them. 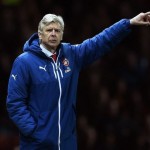 The Gunners head to Monaco for the Round of 16 second leg on Tuesday night and Wenger is desperate to turn around the 3-1 deficit from the first leg in London last month.

Arsenal have been eliminated at this stage of Europe’s premier club competition in each of the past four years to Bayern Munich (twice), AC Milan and Barcelona but Wenger wants that trend to change against Monaco.

“That’s not what you want,” he said. “You want to qualify.

“We have got it wrong in the first game. What you want in life is the chance to put it right.

“We have the opportunity to put it right and after, no matter what, we will be ready to give everything to do it.”