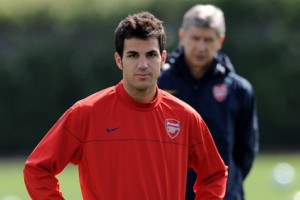 The Gunners have drawn Messi’s Barcelona in the Champions League quarterfinals.

Wenger smiled: “I think they are completely different players. What is interesting is that they played together in the youth team at Barcelona.

“When I spoke with Fabregas’ mother when she brought him here at the age of 16, she said always when they came home they won 6, 7, 8, 9-0 because always they had in the same team, Gerard Pique, Messi, Fabregas. I’m not surprised.”