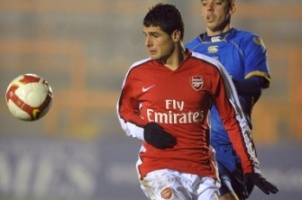 Arsenal manager Arsene Wenger has praised teenager Fran Merida after a great performance and goal in the 2-1 win over Liverpool on Wednesday night.

The 19-year old ex-Barcelona trainee fired in a magnificent goal to get the young Gunners started at the Emirates Stadium and after the win, Wenger lauded the Spaniard.

Wenger told reporters that Fran is a quality player and that he comes from a very good school.

He also added that he kept Merida because he felt that Merida had the quality to break through.

He also said that when you looking at all the players who did not play, it is clear that the competition among the players are very difficult.

He also added that Fran came to Arsenal at a very young age, but Arsenal’s youth school is in line with the way he was educated.