Arsene Wenger In No Hurry To Replace Adebayor 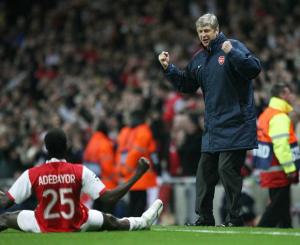 Interesting transfer news are out and it has been reported that Arsenal boss Arsene Wenger has said that the club is not close to signing a replacement for Emmanuel Adebayor.

It was reported that Togo international striker Adebayor completed his move to Manchester City last night and Wenger said that the club is not on the verge of signing anybody but he will be able to spend the money Arsenal find the right players.

Wenger also revealed that the club is not in a hurry because it has a big squad and he will see in pre-season if the club need to make any additions.

Wenger also confidently told that if Arsenal need to add something, the club will definitely do that. The French man also said that Chamakh is one of the players that Arsenal have been following and if the club need to go for a striker then he is definitely a target.

Wenger also revealed that Arsenal now have Rosicky and Eduardo back and now that the club have lost a big striker, it however had gained two offensive players who were absent last season.

Wenger finished by saying that Arsenal also have Nicklas Bendtner, Andrey Arshavin, Robin van Persie and Theo Walcott who can play striker and that these are top players that can be used as strikers.