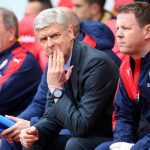 Reports are out claiming that Arsenal are set to offer a new contact to Arsene Wenger.

The Times is reporting that the North London club have prepared a two-year extension for the Frenchman despite their failure to win this season’s Premier League title.

It is understood that there is an October deadline on the offer which has been put in place by majority shareholder Stan Kroenke.

Large sections of Gunners fans want Wenger out this summer but the club will not bow to that pressure and are backing the 66-year-old to stay on beyond his current deal, which expires next summer.