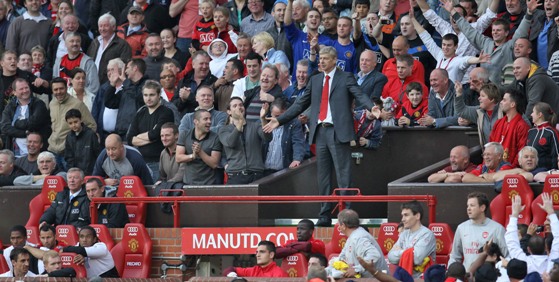 Arsenal manager Arsene Wenger has been told he can expect an apology from Premier League referees chief Keith Hackett following his dismissal in the closing seconds of Saturday’s 2-1 defeat to Manchester United.

It is reported that League Managers Association chief executive Richard Bevan has spoken to Hackett about the Old Trafford incident which saw Wenger sent to the stands by referee Mike Dean on the advice of fourth official Lee Probert.

And he has been told that Wenger will receive an apology from the Premier Game Match Officials Board which appoints officials to top-flight games in England.

It was said that the Gunners boss caught Probert’s attention when he kicked an empty water bottle down the touchline following a disallowed goal for Arsenal.

There was then confusion as Wenger seemed unaware of where he was supposed to go – moving first to the back of Arsenal dugout then starting to walk down the touchline as the whistle was blown.

On the decision to penalise Wenger, Bevan said that it is correct in ‘law’, but completely out of context in the game and was followed by the nonsense which followed over where Arsene Wenger should sit.

Bevan also said that he has spoken to Keith Hackett and that he fully recognises the situation was an error and an apology will follow to Arsene Wenger.

He also added that ‘Lee Probert totally failed to manage the situation and created a needless pressure point taking the focus away from the pitch in a big event with only a minute to go.


Drogba Eyes A Century Of Goals For Chelsea