It has been revealed that Arsene Wenger is hoping that Arsenal can keep their consistency going throughout the entire season. 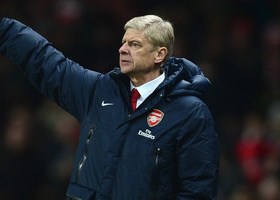 The Gunners are currently five points clear at the top of the Premier League table but is under no illusions that there is plenty of hard work to do in order to remain at this level.

Following Sunday’s 1-1 draw with Everton, the Frenchman urged his side to maintain their dependable form so they can remain at the summit of English football for the campaign.

“It shows you that it will be a tough Premier League and the consistency in the end will be rewarded,” he said.

“The consistency for us is down to us to keep this attitude until the end of the season.

“It gives us belief. Consistency in the results strengthen your belief. You could see with Everton today, had they lost 5-0 at Old Trafford (to Manchester United midweek) they would not have played like that. They just won 1-0 at Old Trafford and they came here with nothing to lose, they are a good team and you could see that kind of influence the confidence has.”