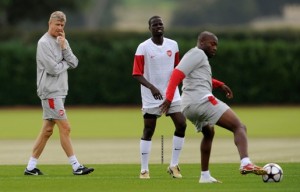 Arsenal manager Arsene Wenger has revealed that he will rule out spending in the January market and said that it is true there is money to spend and that people reproach him for not losing money.

Wenger said that it is not a personal thing and it is just that he has a squad strong enough to compete.

He added that he has worked with the young players such as Diaby, Denilson, Song, Fabregas, Walcott, Vela and Ramsey and he is at a stage where these players are coming through.

Wenger went on to say that there is money to spend for new signings but he is very happy with the squad that he has at the moment.

However Wenger said that he will definitely buy if there is a need to do so after December.

Wenger also said that if the club buys a player who earns £15 million a year, it is impossible to keep the rest on £2 million and that Arsenal will have to think about the consequences.

Rooney Wants To Be A United Player For A Long Time


No Big Signings For AC Milan In January