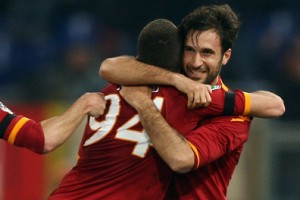 Mirko Vucinic struck a hat-trick against Udinese tonight to keep Roma firmly in the hunt for the Serie A title.

The Montenegro international scored the Romans’ last three goals in a 4-2 triumph to pull his team to within four points of league leaders Inter Milan.

Luca Toni gave Roma a 15th-minute lead and then Vucinic grabbed his first midway through the opening half.

Antonio Di Natale, Serie A’s leading scorer, reduced the arrears from the penalty spot before the break and equalised shortly after the hour mark.

But Vucinic then took centre stage, putting the hosts back ahead with a spot-kick in the 66th minute before knocking in his third with eight minutes remaining to ensure victory for his team.

The outcome left Roma third in the standings – four points behind Inter, who drew 1-1 at Palermo earlier this evening, and two points behind Milan, who host Napoli tomorrow.