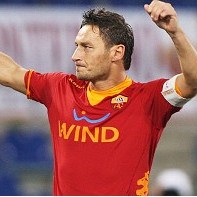 Francesco Totti scored twice in the opening eight minutes to set Roma on their way to an emphatic Serie A home win over Cesena this evening.

The Romans were 3-0 up after nine minutes when Fabio Borini added his name to the scoresheet after Totti’s brace and, although Citadin Eder pulled one back for the visitors in the 58th minute, Juan soon added the Giallorossi’s fourth.

Miralem Pjanic wrapped up a brilliant night for Roma at the Stadio Olimpico with a fifth goal 20 minutes from time.

The result – Roma’s fourth consecutive league win – lifted Luis Enrique’s side up to sixth place, and they have a game in hand after last weekend’s match at Catania was suspended due to a waterlogged pitch.

Cesena, meanwhile, were but a shadow of the side that beat Novara 3-1 last Sunday and remained in the relegation zone.