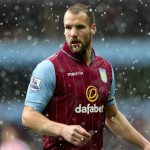 Reports have emerged claiming that Aston Villa are eager to secure Ron Vlaar to a new contract as soon as possible.

The Dutch international defender, who has previously been linked with Manchester United, is out of contract this summer but Villa manager Tim Sherwood is desperate for him to stay.

“I have told him I want him to stay so we will have a chat with him as well,” he said.

Vlaar joined Villa from Feyenoord in 2012 and has made close to 90 appearances for the West Midlands outfit.