Reports are out claiming that the agent of Nicklas Helenius suggest his client could be on the move back to Aalborg this summer. 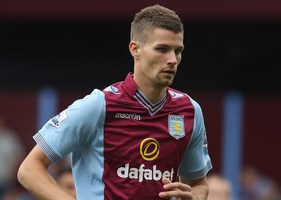 The 22-year old Denmark international striker joined Aston Villa from the Danish outfit for around £1.2million in June last year but has made just six appearances in all competitions in England this season.

With Christian Benteke and Libor Kozak both on the sidelines, Helenius could be given a chance to prove his worth by Villa boss Paul Lambert in the final few Premier League fixtures of the season.

However, if there is no Villa Park future for him at season’s end, he could be on the move back to Aalborg according to his representative Mads Bach Lund.

“If, after the last few games in the Premier League he is told that he must find something else, then a club like Aalborg will be very interesting for Nicklas,” he told Danish newspaper BT.

In his first season with Villa, Helenius has made three substitute appearances in the league without a goal while playing three times in cup competitions and netting once in the FA Cup loss to Sheffield United in January.