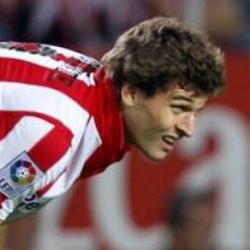 Athletic Bilbao had two players sent off and missed a penalty but still ran out 1-0 winners over struggling Almeria thanks to star striker Fernando Llorente.

The tall Spain forward netted what turned out to be the only goal of the game in the 11th minute after Athletic had already spurned a great chance to take the lead when Mikel San Jose saw his penalty saved.

Athletic were looking in control of the match but two dismissals left them needing to hold on for the final 21 minutes.

Lertxundi Koikili was the first to receive his marching orders on the stroke of half-time for a second booking and he was joined on the sidelines by fellow defender Xabier Castillo, who was shown a straight red for a professional foul in the 69th minute.

However, despite their numerical advantage, fifth-bottom Almeria could not get back on level terms at San Mames as they slumped to their fourth defeat of the season.

Please Wait For Video To Load