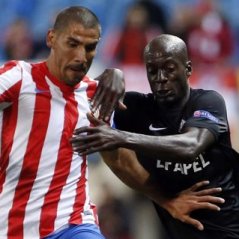 Atletico Madrid extended their winning run in UEFA competitions to 16 games with a comfortable 2-1 victory over Academica thanks to goals from Diego Costa and Emre Belozoglu.

Adrian Lopez had spurned the best chance of a largely uneventful first half but the holders went in front just two minutes after the restart when Costa hooked in Tiago’s flick-on from Gabi’s corner.

The goal brought the Portuguese side out of their shell a little but any hope they had of heading back across the Iberian border with a point were extinguished 23 minutes from time when Emre curled a sumptuous free-kick into the top corner and, despite a late consolation goal from Salim Cisse, Atleti saw out the final few minutes with relative ease.

Diego Simeone’s men have now also recorded 11 consecutive victories in all competitions stretching back to the opening day of the season and they almost certainly ensured their place in Europe after Christmas with a competent display despite resting six first-team regulars.