It has been reported that Atletico Madrid have approached Manchester United for Shinji Kagawa. 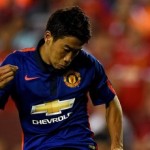 The Daily Express claims that Atletico Madrid have enquired about the availability of the Japanese international playmaker.

Spanish reports claim Diego Simeone is poised to use his considerable transfer funds to lure Kagawa away from Old Trafford, and will offer a fee in the region of £14m to do so.

The 25-year-old has made 38 Premier League appearances for the Red Devils, a fifth of which came from the bench – a fairly modest total for a player the calibre of Kagawa.