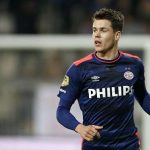 It has been revealed that Atletico Madrid are interested in Chelsea midfielder Marco van Ginkel.

The Dutchman has shone on-loan with PSV Eindhoven, having joined in January. He spent the first-half of the season with Stoke City.

PSV chief would like to extend his loan into next season, but know they face an uphill battle.

Atletico and Chelsea enjoy a close relationship, having exchanged the likes of Thibaut Courtois, Diego Costa and Filipe Luis in recent years.