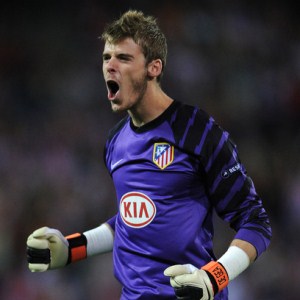 According to Atletico Madrid president Enrique Cerezo, young goalkeeper David de Gea is not about to make the move to Premier League giants Manchester United.

Rumours have surfaced recently suggesting that the 20-year old gloveman was in line for a £15million move to Old Trafford in January but Cerezo has denied those claims, saying that no club has enquired about Spain youth international.

“Nobody has spoken with us. We hope that he will be an Atletico player for a long time,” Cerezo said.