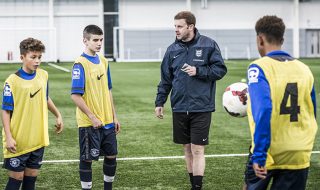 Young soccer players dream of being Messi or Ronaldo but very few understand the amount of dedication that this takes. This takes a nearly obsessive drive to improve as well as compete at the highest level and dominate time after time. Luckily the greats in all sports reveal that there is a simply trick to success and this is hard work as well as attention to detail. These habits need to start at a younger age because by the end of high school some elite players are ready to test their hand in the professional ranks. Taking a proactive approach early as an athlete can help you start separating yourself from your peers in terms of skill. The following are what needs to be done to practice at the highest level in soccer.

This is the most important aspect of improving your game to make a team as a freshman or get recruited by a certain college. Putting in time daily has to be done in some capacity whether you spend a few hours practicing ball handling or play in a pickup game. Set goals for each month in terms of what skills you want to improve then put the time in. Turning weaknesses into above average skills will make you a player that truly has no weaknesses which makes you nearly impossible to defend or get through if you are a defender. The best thing about soccer is practicing ball handling and shooting can be done nearly anywhere. Master your craft and start doing things in games that your peers could only imagine doing. Practice does not always have to be high intensity as recovering from these types of workouts daily can be difficult with other obligations like school.

Playing a great game of soccer after eating a gross amount of fast food generally does not happen. The fuel that is needed for a long game has to be healthy to avoid stomach issues as well as keep the athlete going. A high in sugar meal can lead to a great performance in the opening minutes only to be followed by a noticeable crash later in the match. Unlike other generations of hopeful soccer stars there is not shortage of information on healthy diets for athletes. You can even follow a program online that will help you achieve your goals. The ability to play multiple great games in a day or perform at a high level throughout a tournament will definitely take a healthy diet for nearly all people.

Playing In Front Of The Right People

Playing in big games and churning out great performance after great performance is sure to get you noticed. Professional clubs and college soccer coaches do not want a player that produces great stats during the year only to disappear when competition gets intense. There are a myriad of opportunities for younger athletes to play competitively whether it is in a local league or on a traveling team. A lot of these very competitive teams to get on there are open tryouts but having made a decent name for yourself never hurts. The one thing that you should never do is quit on a play or game as you need to be relentless in effort as well as in competitive nature.

Trying To Play Up An Age Group or Two

Whether you are playing club soccer or competing at a local indoor soccer league trying to play up an age group or two can be beneficial. Playing with superior athletes allows a great younger player to develop their skills as simply being faster than their opponent will no longer be effective. Turf soccer shoes can allow a player to change direction in a quicker way on turf than on grass. Only have a child play up an age group if they are skilled as otherwise they will ride the bench which is not beneficial to them.

Work On An Immense Amount Of Conditioning

The last thing that a young soccer player that might be in a huge tournament wants to do is to be taken out as they are fatigued. Conditioning should be a primary focus for all soccer players as a 90 minute game takes dedication to prepare for. Going out and running is the obvious choice but incorporating things like running hills or weight vests can take these workouts to the next level. If you can run at a good pace weighted then you will have no issue doing the same in a game. Strength is also important when fighting for position even though flopping is prevalent. Not allowing anyone due to your strength to push you off of a spot or the ball will help reduce turnovers which players at all levels want to do.

Take time to put in the work and manage the details that it will take to be the best soccer player possible. Nothing great happens without hard work so set yourself up for success through dedication!