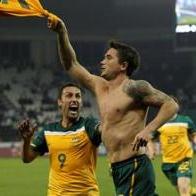 A header from striker Harry Kewell three minutes from the end of extra time gave Australia a 1-0 victory over holders Iraq in their Asian Cup quarter-final in Doha.

The entertaining match at the Al Sadd Stadium looked to be heading to penalties after both sides squandered a number of opportunities before Kewell was left unmarked to direct his header home after a beautifully-flighted ball from Matt McKay.

Australia, the highest FIFA ranked side in the tournament at 26th, will play Uzbekistan in the semi-finals at the Khalifa Stadium on Tuesday.