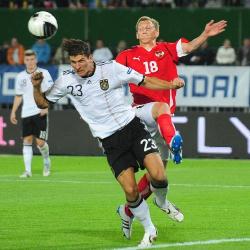 Bayern Munich’s Mario Gomez grabbed a last-gasp winner as Germany beat Austria 2-1 to maintain a 100 per cent record in Euro 2012 qualifying Group A.

Germany, having won their first five games, took the lead a minute before halftime when Gomez scrambled the ball home from a corner for his first goal of the night.

But Austria, beaten in their last five meetings with their neighbours, levelled five minutes after the break when teenager David Alaba’s cross was turned into his own net by Arne Friedrich.

Austria looked the more likely winners until Gomez got in front of his marker to head in Philippe Lahm’s cross in the last minute.

The win left Germany with 18 points from six games and Austria with seven.