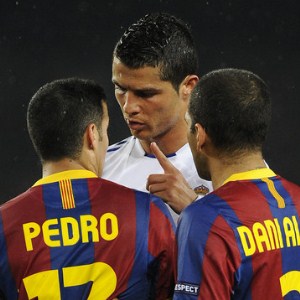 Barcelona moved into the Champions League final after a 1-1 draw with Real Madrid at the Camp Nou gave them a 3-1 aggregate semi-final victory.

Following the 2-0 win at the Bernabeu, Barca were clear favourites for the tie even before Pedro’s second-half goal from Andres Iniesta’s glorious pass gave them a 3-0 overall lead.

Marcelo pulled Madrid level 10 minutes later but the expected grandstand finish failed to materialise as both sides cancelled each other out.

There was a touch of controversy as Gonzalo Higuain had a goal disallowed early in the second half with the score still goalless and, while there were none of the ugly scenes seen in the first leg, late in the match featured a spot of Barca simulation and some fouls from a frustrated Real.

The Liga leaders will now face either Manchester United or Schalke 04 in the final at Wembley later this month, with United favourites to progress after they won the first leg 2-0 in Germany.