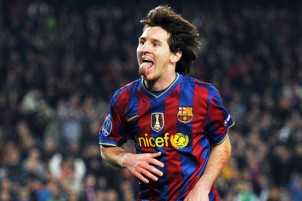 Lionel Messi staged another masterclass to power holders Barcelona into the quarter-finals of the Champions League at the expense of Stuttgart.

Messi struck a brilliant opener after just 12 minutes to put Barca on track, and then played a key role as Pedro Rodriguez made it 2-0 soon after as the Catalan giants built a 3-1 aggregate lead.

Messi, who was a constant menace, added a third on the hour mark to take his tally to eight goals in the last four games before Bojan Krkic completed the romp late on as Barca became Spain’s only representative to make it into the last eight.